Caesars Sportsbook and LSU announced that they agreed to a multiple-year sponsorship deal. As a result, LSU becomes the first Southern Conference university to have a partnership agreement with a sports betting or gambling firm.

According to pay per head reports, the deal is worth millions of dollars. However, both parties didn’t reveal the contract’s actual value. Also, they have no plans of having a Tiger Stadium sportsbook.

The agreement came after Louisiana legalized sports betting. At present, the Gaming Control Board is accepting sports wagering license applications. However, it is the first step in opening an online sportsbook in the state. 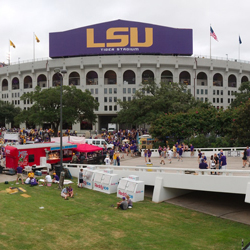 The Caesars Sportsbook and LSU deal came as the national regulations governing body for college sports allowed athletes to earn from their name, image, likeness. Also, profiting from their NIL will not disqualify them from their college sports eligibility. However, it is unclear if players more than 21 years old can participate in Caesar’s ad campaign in Louisiana.

According to DiscountPayPerHead.com sources, Caesars has been actively promoting its brand. In addition, it bought the Superdome naming rights. The Superdome is the home of the New Orleans Saints.

Caesars got the naming rights for the Skyline Club at the Tiger Stadium. Also, it can post signage in the state starting September 18. LSU will face Central Michigan that day.

The deal also allows Caesars to post signages at the Alex Box Stadium and Pete Maravich Assembly Center. In addition, the sportsbook will have a presence on the school’s mobile app. LSU said they have a clear vision of how athletics and entertainment can improve the fan experience. They are also excited to work with Caesars.

Caesars has been expanding its presence in Louisiana. It is planning to rebrand Harrah’s New Orleans and Isle of Capri Casino.